5 Riskiest Choices Made on “The 10 Commandments of Chloe”

The 5 RISKIEST CHOICES Made Shooting THE 10 COMMANDMENTS OF CHLOE

It’s been a while since I’ve done a guest post on here, and its great to be able to share some secrets about our latest film The 10 COMMANDMENTS OF CHLOE (available now). 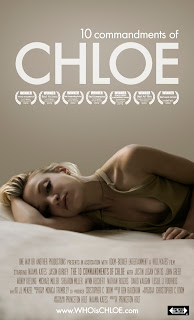 Let me first say that my debut feature Cookies & Cream took a whopping 24 days to shoot (off and on), and after that nightmare, my partner Brian and I devised a much better plan on knocking out these small stories faster and cheaper – shoot less days by using available lighting. With Brian’s debut film Uptown, we had reached our zenith in perfecting this method – we shot in 5 days (+ 3 pick up days due only to a malfunction of the 2nd camera of our 2 camera shoot). Also, the actors improvised – Brian only wrote about 5 scenes out. The rest of the shoot,  he used notecards which he gave to the actors, who effortlessly delivered in scene after scene.

I was so inspired by this method and also quite envious at the lack of “babysitting” Brian had to do because of how talented our lead actors were, that I wanted that same kind of experience. As a director, I wanted the luxury of not having to say much to the actors – allowing me to concentrate on other responsibilities on a movie set. I craved the kind of trust and professionalism we had with our lead actors on that film. That experience still was with me, even 2 years later when it was time to direct 10 COMMANDMENTS OF CHLOE.

So my lead actress Naama Kates and I, talked for months about the Chloe character, and then devised the brief road-map of her life in the form of an outline. Right after locking our outline, I hired Christopher C. Odom (DP and co-producer), to photograph the film. Two weeks after that, Naama flew in from LA, and we met in the heart of Nashville, TN. For creative (and spiritual) reasons, we forced ourselves to perform in these highly uncomfortable, and risky circumstances – utilizing what we felt would be the height of on-our-feet, creative and inspired energy.

Still, here are the 5 most risky of all of our choices made during the film: 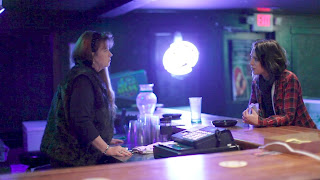 I had time to write one. Plenty of time. And I had the confidence to do so. Still I just HAD to try it out for myself as a director. Even when there is no script, there is an outline, and the outline should contain the setting and mood the scene takes place in. A good outline also contains the subject, mood, and intention of the conversation about to take place. So if you hire great actors, which we did, they soon know who their characters are better than you do, and are empowered by this freedom. There were many instances where I would walk back on set and overhear Naama and Jason Burkey further developing and writing our story even beyond what the outline contained. That’s talent! They both were subsequently awarded Best Actor and Supporting Actor honors from various places. We also can’t fail to mention the crucial benefit of a great editor (Ben Baudhuin), who was literally the writer of our 3rd and final draft of the story.

Some folks don’t have too much of a problem with the no script thing, but the no rehearsal thing really freaks them out (professionally and creatively). That wasn’t the case with Naama and Jason, two veteran actors of both Network TV sets as well as small indie film sets. They’d seen it all. They told me they didn’t need to rehearse. It would take away the freshness of the scene. They were right! The most amount of takes I did in any given scene was 2. A lot of times we got it in one, and moved on.

3) Casting on the Spot 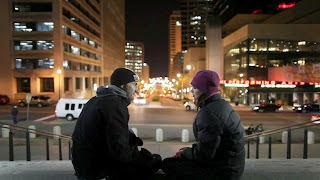 When we showed up in  Nashville, there was no cast at all. We held a rather “large” audition (large for Nashville), and that’s where we would meet Wendy Keeling (who played Jesse), and a couple more actors. But we had to cast Chloe’s love interest Brandon, who was very important. The chemistry was crucial, and the character would occupy a good amount of screen-time – second only to Chloe herself. This is where your reel comes in very handy, actors. Not only did Jason Burkey have his own website, but he had his reel right there, so we could assess a lot about what he would be like in our film. Not only that, but Wendy knew him very well, and she was able to “vouch” for us. 2 nights prior to shooting, Jason hung out with Naama and the rest of us for about an hour. They spoke at length about their characters and exchanged tangible ideas, and after she felt comfortable working with him, we cast him right away.

I was watching an interview with acclaimed actress/director Amy Seimetz the other day, and she mentioned something about why she keeps working with the same people, and she mentioned not only comfort and camaraderie, but AVAILABILITY. As a company who consistently makes films, we can vouch for this and underline that an actor’s freedom and availability are nowadays huge, huge factors in casting as well as talent. So actors should be mindful to do what you have to do to set your life up to simply “be available.” This, unfortunately is becoming a lost art in the NYC area. 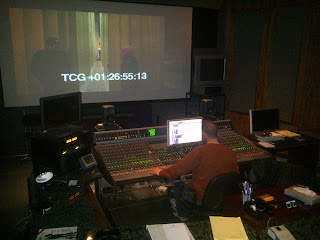 This is another famous “no-no.” Drives DPs, UPMs, and producers all nuts. In our case, I shared with our DP Chris images of each location, and we chose prime lenses that worked well in available light. My argument (as I have said on Twitter before), is that every shot list basically looks the same. Each scene should have some version of Wide, Medium, Close-Up, Close-Up. Right? Isn’t this Basic Scene Coverage 101? In some rare occasions (like in Chloe’s dance sequence), your coverage is all in one shot, and when that happens, pat yourself on the back for your efficiency. I think I can say that over the years I have grown to be much more efficient as a director, and that obviously comes from producing a lot of films.

As Chloe began the festival circuit, our co-producer/DP made me aware of a company’s interest in distributing THE 10 COMMANDMENTS OF CHLOE. As we went further into our festival run, we heard from a couple more traditional distributors and aggregator-types. We have had films in our catalog picked up by distributors before but that old model is dead. These days with piracy, social media, and over-saturation, the last thing we felt we needed was yet another barrier between the film and its audience. On some films it still is a major help, but in the case with those of us that make smaller, personal films, we need a change. Our choice to make the film readily available to viewers was risky, yet the most rewarding because we are hearing directly from viewers and fans of the film and how they are inspired by it. Immediate feedback directly from your audience is PRICELESS. And we are now able to receive that while still on the film festival circuit. We are happy to embrace this new way, and reject the old way – by making the film immediately available to our audience.

You can now see THE 10 COMMANDMENTS OF CHLOE in FULL – right from the film’s website www.WhoisChloe.com. Donate whatever you want – even a dollar, and within 15 minutes you’ll receive a password to see the film!