5 Films That Influenced THE 10 COMMANDMENTS OF CHLOE 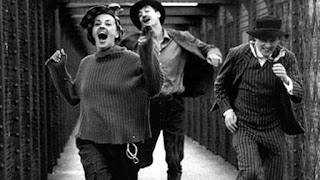 Here are the 5 films that influenced my latest feature THE 10 COMMANDMENTS OF CHLOE, in no particular order.

Although not my favorite Godard film, its definitely one of them. The cinematic experimentation in this film rivals only Breathless and A Band Apart. The chapters in Vivre were direct influences on CHLOE, ours being 10 different commandments that she lives by. Anna Karina’s hair and wardrobe changes were also so cool in this film its ridiculous!

Earlier this week I wrote about how much I was inspired by Uptown and our use of available lighting and improv. Brian usually writes out key scenes in his improv films (even doing so on the Western he is directing soon). I didn’t write out any scenes in CHLOE, which is even riskier. Uptown also convinced me of how crucial casting is not only for chemistry and character, but also dedication and skill. The more professional the actor, the best the overall experience. Naama Kates and Jason Burkey gave me what Chris Riquinha and Meissa Hampton gave Brian on Uptown – Magic.

Those of you that have seen both films will immediately notice the homage I paid to a particular scene in Jules and Jim. However unlike Uptown and my #5 influence “Nashville,” this one wasn’t a conscious influence. It was retro. The moment in Jules must have permanently been tattooed on my brain, and it came out in CHLOE. When I was choosing locations, the Pedestrian Bridge in downtown Nashville just begged to be shot. For some reason, I blurted out “they should race across it.”That freedom perfectly fit Chloe’s carefree, playful personality, so it seemed to just fit. Very special spontaneous moment, and its one of my favorite scenes in CHLOE .

4. The Pursuit of Happyness (Gabriele Muccino)

We are used to seeing male characters in movies sacrifice everything for their ambition, but not often female characters. Will Smith’s sheer determination (and vulnerability) was a direct influence on Chloe’s character.

Being that we shot the film in downtown Nashville, you would automatically expect this to be on this list. But its not on here for the obvious reason of being shot in Nashville just like CHLOE was. In fact, unlike Altman, I purposely tried to avoid country music as much as possible in the film, and concentrate on music period. There are alternative bands, pop bands, funk, blues, hip hop, hardcore rock acts, etc, all over the city. CHLOE isn’t about a city of country music (as was Altman’s Nashville), it is about a city of music. A city of hope.

The conscious influence from Altman’s Nashville is his technique of capturing multiple conversations that take place in the same location. I wanted to put a bunch of interesting people (actors and non-actors) in a room and have them talk. They decided what to talk about, and I would choose what pieces I thought were funny or interesting. They had lav mics on them, and we let them just go to town. In the party sequence (the 2nd Commandment), there is a guy sitting next to a girl on the couch. His name is Nathan Rodgers, and I met him thru my best friend who was living in the DEEP south at the time. Nate is a bartender, and former musician. He was born “in character.” And funny as all hell. Sitting next to him is Leslie Voorhies, a model/actress, who astonished me with her comic timing (I had no idea she had it). With no rehearsal, they played 2 stoner/artists, high and drunk as ever, talking about nothing. But even in their small talk, profound statements are made. Along with the bridge race, this is my favorite sequence in CHLOE, and one I had more fun shooting than I ever had as a director.

You can now watch THE 10 COMMANDMENTS OF CHLOE, which has been released via its website: www.WhoisChloe.com !

← 5 Riskiest Choices Made on “The 10 Commandments of Chloe”
Brian Ackley Announces His Next Feature, Details →