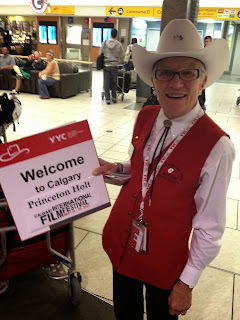 THE 10 COMMANDMENTS OF CHLOE co-conspirators Princeton Holt and Naama Kates (along with DP/Co-Producer Christopher Odom) recently sat down with Rogue Cinema‘s Kirsten Walsh to discuss their award winning feature film collaboration, and how they pulled off a feature film shoot in 4 days without a script or a crew. Check it out after the jump! 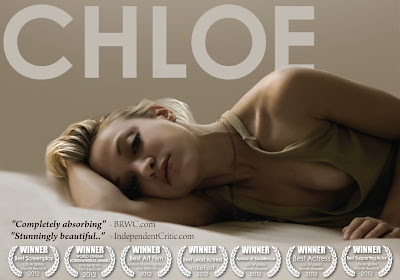 “The 10 Commandments of Chloe is not a traditional, run of the mill narrative by any means. With a unique backstory and incredible pre-production that involves more than two states and distances of over a few hundred miles, the filmmakers behind it took some time to fill me in. Since the film was reviewed in the June, the film has secured its World Premiere at the Calgary International Film Festival in September. Princeton Holt- the director- has an extensive resume that includes his breakout feature with Naama Kates- star- in 2008, Cookies and Cream. Even their talented DP, Christopher Odom, joined in the interview!”

Kirsten Walsh: How did you come up with the idea of The 10 Commandments of Chloe?

Princeton Holt: Naama and I had decided to do something together with her as the lead. I wanted to emulate the efficient way that my company made Uptown, one of our earlier films that was shot in 5 days and used improv. We both were in very difficult periods of our lives at that point, so we wanted to convey some of the struggles of life into whatever we were going to do.

Naama Kates: Yeah, I had just moved out to Los Angeles that year and was in a very strange, transitional period. Culture shock, career shift, isolation… It was tough! And Princeton was in Nashville; we were both sort of in the woods. We were talking on the phone a lot, speculating, commiserating, etc. P is a very visual thinker; he’d always ask me to describe things I was talking about, like, “So wait, was it light out? I’m seeing lots of reds…” Hah! It just became a storyboard.

KW: Can you talk about the “commandments”? Naama, you’ve mentioned that the film is slightly autobiographical, is that part of it?

NK: Yes, well, it is slightly autobiographical, sure, in that I am a musician, an artist, and I’ve moved to cities by myself; I’ve had to navigate new towns, and systems, with my art in my hand, my heart on my sleeve; I’ve had difficulty expressing this drive, and driving this expression home. I think all artists do. We’re not making anything tangible, right? It’s strange. People think you just want to be famous. I don’t really want to be famous. But the Commandments– that was Princeton’s idea, to break it up that way– in fact, I think he came up with the title before the plot? Right?

PH: Yeah, the idea of the title came from God-knows-where, but I knew I wanted to break up the film into 10 chapters. So the commandments were an excuse to do it a differently than I had seen in cinema before.

KW: Now the film was shot entirely in Nashville in 4 days- can you describe shooting? Were you rushed at all to get everything you needed?

PH:The shooting was actually a breeze. It was deceptively simple. We were able to shoot an average of 5 scenes a day, working full evenings up until late nights – sometimes until 3, 4 in the morning. We were definitely rushing. I’m not quite sure how the speed affected Naama and the other actors…

NK: It all went so smoothly, it was great! Filming is always a whirlwind.

KW: I recently read your (Princeton’s) post regarding the 5 riskiest choices that you made while shooting “…Chloe”. As a filmmaker, reading the decision that you decided not to use a shot list totally caught me by surprise! How did that work?

PH: Yes it is alarming! I keep trying to copy that kind of production on other projects I am working on now, but I am finding out that it simply isn’t possible to emulate. In our case, I sent our DP/Co-Producer Christopher Odom to each location and most of the time I sent him photos that I found online or shot myself of what the master shot would be, and then we knew that we would be going in for regular coverage after that. I had a shot list I wrote down and sort of put them on my script breakdown sheets of each scene, but I didn’t really share them with everyone.

Christopher Odom (DP/ Producer): Drawing upon my own production experience as hyphenate filmmaker, together we devised a shooting schedule and plan of attack that resulted in an overall shooting strategy that served as a template for the film and each scene, which was as specific as to how long each take could run, how many takes each scene could have, and how long we could stay in each location. In effect that mostly boiled down to pieces of standard coverage, which was mostly a master, two-shot, and a closeup for each lead. Rather than shoot multiple takes of the exact same angle, we strove for multiple angles when we needed another take. So instead of a 20:1 or 10:1 ratio per shot, per scene, our goal was 4 takes period per scene. Having a great camera, with proper lens selection, along with a great sound rig, also helped add to the overall production values, as well.

KW: Wow. That is definitely doing a lot of planning, but it definitely paid off! Now, with Naama based out of Los Angeles and Princeton based out of New York, how exactly did pre-production work for the crew?

PH: Our production “crew” only consisted of me and Christopher, the DP (of course our post crew was much larger and more like a standard post crew). In some cases, we had Nathan Rogers (who played a small role of the musician/party- goer who was high and drunk on the couch), PA for us, and hold the boom and do other stuff, but for the most part it was just us. I boomed a lot of scenes myself. I didn’t want Naama too involved in pre-production besides approving our cast and crew because I didn’t want her to worry too much about that part of it so she could concentrate on the character. She did bring the most important element of pre-production with her on the plane from LA though. She somehow brought the small amount of money we needed to get started!

NK: Yep, I was crowd funding before it was even a buzzword. 🙂

Read the rest of the interview HERE.

Our good friend Ben Baudhuin (who brilliantly edited 10 Commandments of Chloe) recently edited the trailer to the documentary MIDWAY, which premieres at TIFF.

For more info on the film make sure you visit its official website MidwayFilm.com